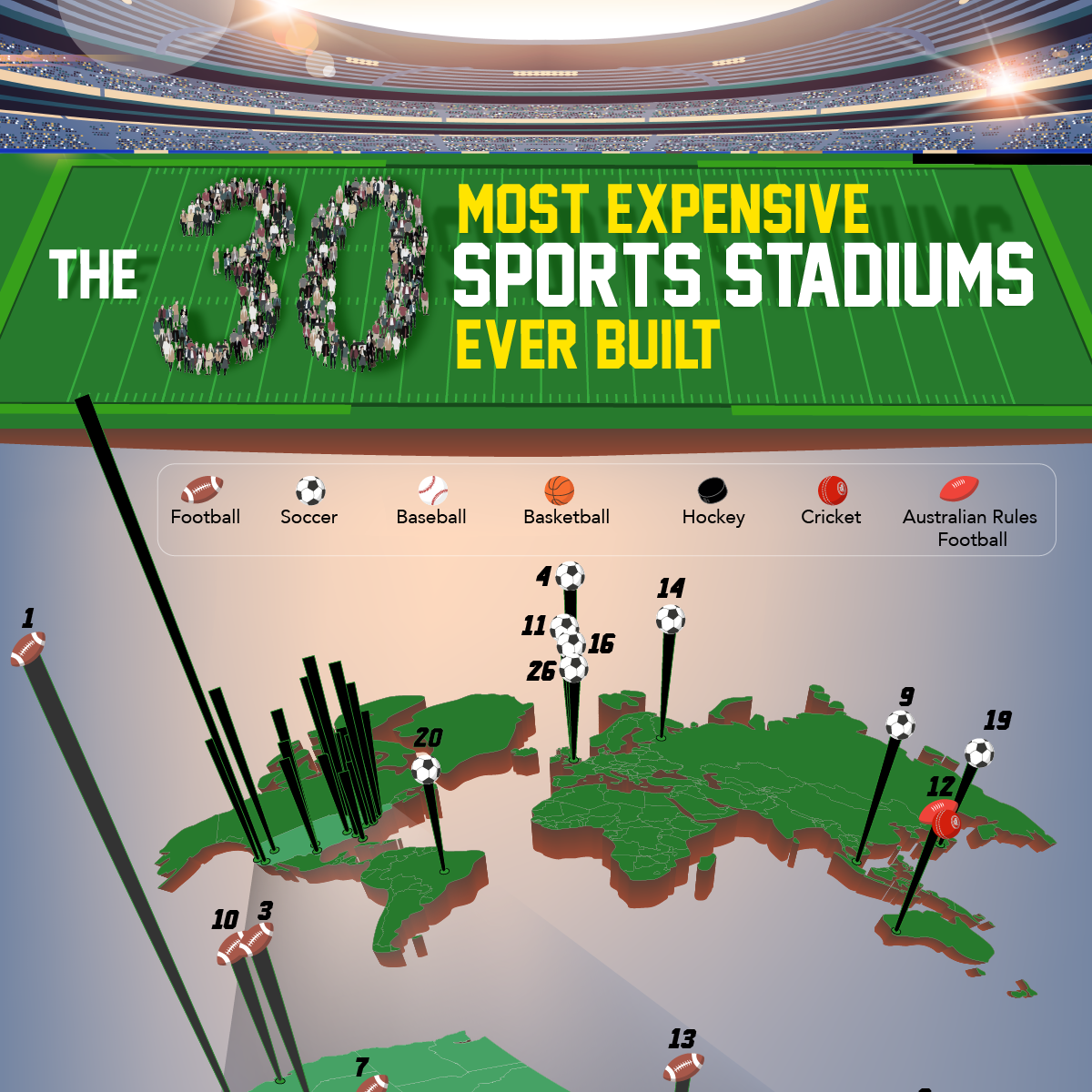 The 30 Most Expensive Sports Stadiums Ever Built

By Construction DisputesFebruary 9, 2021May 13th, 2021Industry News
No Comments

Home » Blog » The 30 Most Expensive Sports Stadiums Ever Built

The 30 Most Expensive Sports Stadiums Ever Built

Watching professional sports teams compete is one of the most popular forms of entertainment, and it has been for many years. So it comes as no surprise that the sports industry is as lucrative as it is: It’s now estimated to be worth more than $500 billion. With millions of fans to impress and plenty of capital to spend, teams and their owners have begun to build much larger and more advanced sports stadiums being built around the world.

The team at Construction Disputes looked into how much money has been spent on the construction of sports stadiums and created this list of the 30 most expensive stadiums ever built. It includes stadiums from around the world, representing a variety of different sports. With all of these stadiums having been constructed at different points over the past 20 years, the construction costs have been adjusted for inflation.

What Is the Most Expensive Sports Stadium Ever Built?

The most expensive sports stadium ever built is SoFi Stadium in Inglewood, California, which cost $5.5 billion to build. SoFi Stadium opened in 2020 and is home to two NFL teams, the Los Angeles Rams and the Los Angeles Chargers. This stadium is also scheduled to host Super Bowl LVI in 2022 and the Summer Olympics in 2028. The construction costs for SoFi Stadium were more than double those of MetLife Stadium, which was the second most expensive stadium ever built, costing $2.03 billion in today’s dollars.

The World’s Most Expensive Sports Stadiums Ever Built

Why Was SoFi Stadium So Expensive to Build?

Even though football is an incredibly lucrative sport, $5.5 billion is a lot of money to spend on a football stadium, especially when other NFL stadiums were built for a fraction of the cost. So why was SoFi Stadium so expensive to build? For starters, its floor area covers 3.1 million square feet, making it the largest NFL stadium. It also holds the bragging rights for the largest video scoreboard in history, which is longer than the football field at 120 yards long. The double-sided scoreboard features 70,000 square feet of digital LEDs on each side and weighs an unbelievable 2.4 million pounds! The stadium was built to withstand earthquakes, a necessary cost, as California’s seismic activity has been increasing over the past few years. It also had to be built partially underground to avoid the LAX flight path, so it sits 100 feet below sea level. These necessary additions to the infrastructure, as well as the latest technology and updated amenities, will certainly drive up the cost of a sports stadium this large. So will the cost of the ten million worker hours logged by the 3,000 construction workers who built the stadium.

Which Type of Sports Stadium Is the Most Expensive to Build?

The Ten Most Expensive NFL Stadiums Ever Built

Stay in the loop with our monthly newsletter